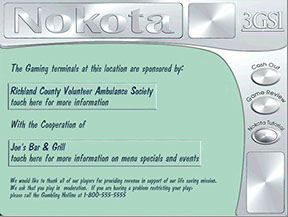 This screen introduces you to the sponsoring organization of the gaming on this site and to the events, specials and menu of the bar.  When screens for the terminals are on and in idle, this screen will alternate with the Game Review screen. 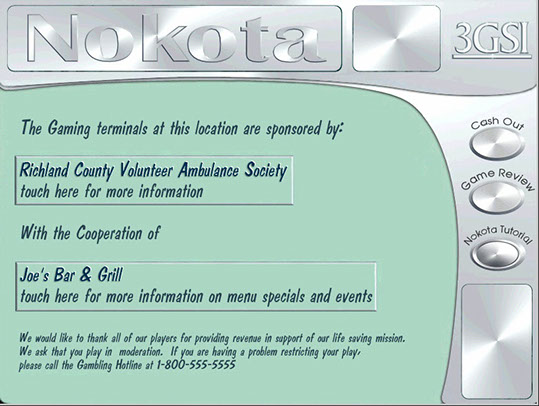 The organization operating the gaming terminals in Joe’s Bar will place some additional information on themselves for those who press this button.  Why not use this as an opportunity to enlist volunteers or additional donations.  Building interest and loyalty among the players will only strengthen their gaming and their organization.

Joe’s Bar & Grill events, specials and menu would be available to those pressing this button.

Takes you to the game review screen that also automatically rotates with this screen in idle state.

Takes you to the game review screen that also automatically rotates with this screen in idle state.

We mean it.  If you have a gaming problem, we want you to get help fast.  We do not need the headache and heartache your problem brings us all. 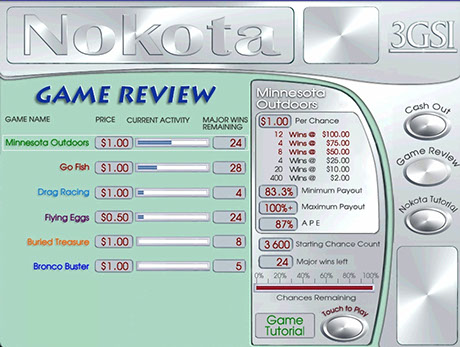 This screen is where players learn of the various game titles and game lots (a particular set of chances) being offered at the site.  All of the games shown are available on all of the terminals at the site.  This screen clearly demonstrates that these games are not “slots” in that the information provided players on each of the games is unparalleled.  Those who are not familiar with these games will jump to the conclusion that you can’t offer players this much information and still have profitable games.  We can show them mathematically how it works but the best proof is that it is happening now. 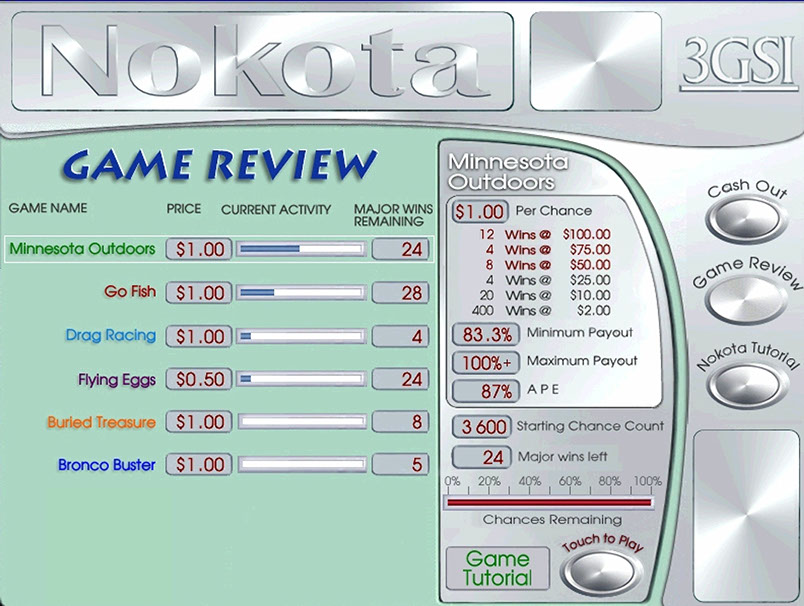 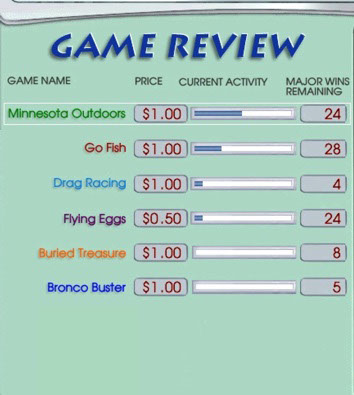 For each game title (in this case six are available, nine games would be max) the player can see the name, cost per chance, the current level of sales of this game at this site and the quantity of “major wins” (winning chances that pay => 50x the price per chance) remaining in the game lot that is in play for this title.

Some players may be interested in competitive races to find the last major wins and therefore buy into games that have a lot of activity while others may like to play quietly without much competition.  We provide the choice.

With paper-based pull-tabs, a player can see how many other people are playing in the same game lot by merely watching.  We keep the same quality of competitiveness with our activity meters.

The quantity of major wins remaining in each game lot is already posted and available to players of the paper-based pull-tab.  This information gives the electronic pull-tab a real advantage over slot machines.  Whereas with pull-tabs the saying is “we don’t play dead jars [games],” meaning that there is always at least one remaining major win among the chances that are so visibly present, the same can not be said of slots -- you could go for days without a large winner. 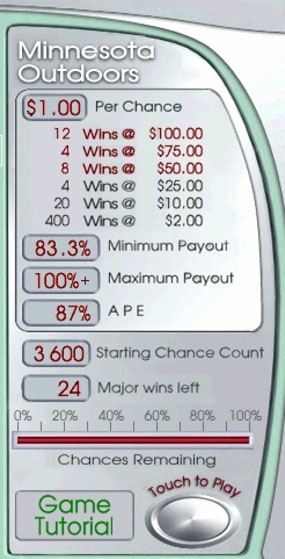 Payout Table.  The quantity of wins at each payout level when the game lot is new.  Note that those in red are considered the “major wins,” one of which must remain in each game lot offered for sale.

Payout percentages.  If every last chance in the game lot were sold (meaning the last chance was a major win), the game would payout 83.3%.  However, if the major wins were redeemed early, as is possible with a randomization, the payout can actually exceed 100% in any given game lot.  The actual performance is in the “APE” which is the Average Payout Expectancy (a statistical calculation) for the game until 20 game lots have retired.  After 20 game lots have been played, the APE becomes the Average Payout Experience - a calculation based on past performance at this site.  This game has paid players 87% of gross revenue.

Quantity of chances the game lot begins with.  This provides meaning to the percentage of chances remaining.

Quantity of major wins remaining.  In this game lot, they are all remaining.  Note the chances remaining are also at 100%.

Percentage of total chances remaining in the game +/- 5%.  This provides similar information to that when looking at a transparent container of paper tabs.

Provides you with the story basis for the game and shows symbols and how they might win.

Why not?  Take a chance, the stats look good.  Go to the game play screen such as that below.

These three buttons are constants on all screens.  You will see them set up in this order throughout Nokota Gaming System.

Cash Out:  immediately takes you out of the game.

In player activated gaming terminals you have the old style which is represented by rotating symbols in three windows.  This, of course, came from slot machines with three reals that had slots or notches in them that allowed a stopper to slip in and stop the reels one at a time.   Now the reels are all computer driven; however, they still stop based on independent randomization and payoff if the symbols line up a certain way.  Of course, if you have been around in the last ten years, you will note that it is no longer just three reels that appear to rotate.  Now there are twenty or thirty ways to win a payout.  But, the classic was three symbols.  Paper-based pull-tabs borrowed from slots.  If you open a perforated paper window and see three symbols lined up -- you win.  This has never been very imaginative but it has been the custom with paper pull-tab games.

The symbols used in revealing the outcome of random processes does not along make the game.  Pull-tabs are not slots.  They do not have several independent random events that, depending on the outcome of several random sub-events, delivers a prize.  Slots are not depletable, they keep going. The randomization in a paper pull-tab is all about which ticket a person receives out of a container where all remaining are mixed together.  Their symbols are static and predetermined - printed.  Pull-tabs have a certain quantity of winning and losing chances contained in a fixed quantity of chances -- even if an electronic pull-tab used revolving or spinning symbols, it would be entirely different from the structure of a slot machine.

The two game below are very different games meant to show an old style and a newer style.  We envision that, with the participation of many other independent game developers, we would build rather quickly to a library of a couple hundred titles.  Unlike other electronic pull-tab style games, we look for a game theme and entertainment sequence that goes far beyond the mere mimicking of static printed paper-like symbols.  We can enhance the entertainment and still provide all of the qualities that have contributed to pull-tabs being the most transparent and straight-forward game of chance.

This game is mostly to show how we differ from slots but can have a similar rotating symbol appearance.  On the other hand, it is not unlike paper pull-tabs only converted to an electronic pull-tab.  Still, not very creative by our standards. 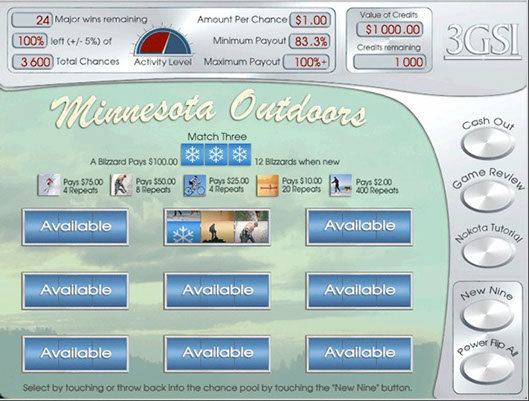 Quantity of major wins (50x bet) remaining in this game lot.  It is real-time information and would go down with each.  It will never be 0 as the lot would go into retirement.

Total value of credits and quantity.  The quantity varies by price per chance for game being played.

Velocity of current sales in this game lot at this site.  More to the right, means that more of the terminals at this location are acquiring chances at a higher speed.  This provides the same information as the "current activity" bar graph on the Game Review screen.

"Minimum Payout" is the payout expressed as a percentage if all of the chances in a game lot are sold - meaning the very last chance available is of major win size.

"Maximum Payout" is always 100% plus, as in Nokota games a player can actually "beat the house" if the major winning chances appear prior to enough losing chances to make a profit.

The symbols that win, the quantity of such winning chances prior to any play in the game lot  and the amount they pay.

Field of nine chances from which a player may select all or any of them that “feel lucky,” throwing the remaining back by touching the “New Nine” button to the right.  Perhaps some players will like the corners while others prefer the center.  Once you touch a chance, the symbols will go through a revolving process until they finally display the outcome of the random process.  While it appears like a  slot, it is far from it in that players are playing from a finite quantity of chances in the game pool and each losing chance is in fact one chance closer to a win.

At any time a player can call for a “New Nine,” meaning whichever chances they have not selected from the current screen of nine will be thrown back into the game lot and a new nine selected to offer.  This way you could play only corners or the left or the right side, whichever you think are more “lucky” while throwing the others back into the pool.

The name of this will be changed to “Power Pick All” meaning that you select all nine of the chances offered.  They will reveal one at a time.  This feature will allow you to carry on a conversation at the table while glancing at the game to see how you are doing.  By having this feature a player is not glued into an exclusive relationship with the terminal.

This game shows a little more creativity, more in keeping with the games we will be producing.  It provides all of the information of the game above, plus, if you look to the right of the fourth rock (yes those are nine rocks that you select to direct your cast toward) you will see silhouettes of three people.  This tells you that there are three other terminals currently fishing in your pond.  We will indicate how many terminals on-site are playing the same game you have chosen while you play any and all of our games.  It will be fun to guess who it is and you do see when they strike a major win. 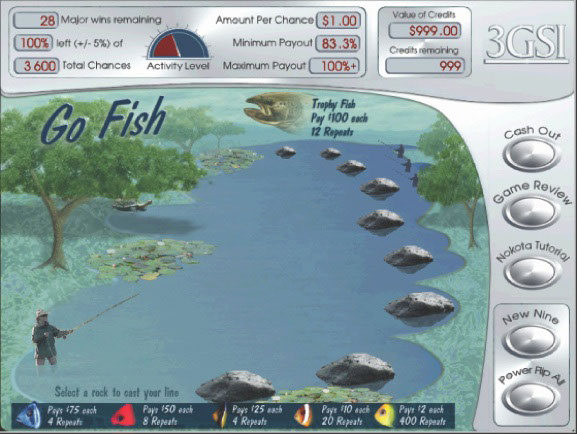 These three fisherman are representatives of their being three other terminals at this site that are actively playing this exact game lot - or, if you like, they are fishing in your pond.

The white boxes contain rocks, nine in total, that are each selected by the player as a chance.  The fisherman casts to the chosen rock to reveal the outcome of the random event as the line is reeled in.  A fish can strike at any time up until the line has been retrieved.  Certainly this is not your typical game.

The fisherman, you, cast to each selected rock reeling back the line hoping for a fish to strike.

This turtle takes periodic swims.  They have no meaning other than that a player might ascribe to them.

The table of winning fish images, quantity of each and the amount they pay.

The above gaming platform or frame could stage hundreds of the most transparent and player friendly games of chance found anywhere.  Games designed by dozens of independent studios competing for players through one common, easily regulated and inexpensive system.  We have waited and worked on this design for better than twenty years, so long it is even off-patent.  Is it still too avant guard to be authorized?