The beauty of wheels, as displays of random outcomes or as chance selection devices, is that they provide a common and visible object that, when slowly spinning, causes players to raise their voices, if not their bodies, as their bet selection slowly rises as a possible win and then groan and throw themselves back in their chairs as it slowly passes.  Wheels physically move players.  The slow revolution of the wheel, when players can easily track the segments they bet, until the final selection, is what we call the “sweet zone.”  Our wheels are designed to maximize sweet zone -- they are entertaining.

The Gaming Studio has designed/produced three styles of gaming wheels.  The latest are the electronic simulated wheel networks - aimed at providing passive games of chance in charitable gaming licensed bars and taverns throughout a jurisdiction.  Then, our older legacy wheels with tables upon which players indicate their bets through placement of chips (and tickets in Minnesota) or those very basic traditional wheels where players buy tickets representing each of the chances on the wheel prior to its spinning and are most often awarded prizes.

In 1984, Minnesota passed legislation allowing for bingo, pulltabs, raffles and paddle wheels.  Gaming Studio, then known as Great Gamble, became a licensed distributor in Minnesota for gaming supplies.  In 1986, we designed the Minnesota Tri-Wheel®, a paddle wheel using a slotted table and tickets to register pre-spin bet selections. 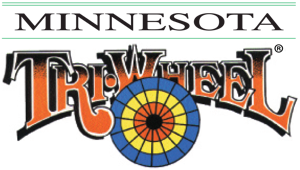 Note:  The MTW using tickets is licensed for manufacture and sales to International Gamco.  The Tri-Wheel Queen in Minnesota is Sandy Hoff.  No one has trained more operators and installed more wheels.

Possible wagers:  Individual numbers in each of the rings.  Alpha A - D which divides the blue ring into four sections of ten numbers each, therefore, a one of four wager.  Alpha E - I dividing the yellow ring into five sections of four numbers each, therefore, a one in five wager.  Odd/Even applies to odd and even numbers in the blue ring; however, there are six numbers (shown on the wheel), three odd and three even that will result in all odd and even wagers losing.  Odd/Even wagers are a 15% house advantage given the six numbers extracted from the forty.

Below is a sample of the original tickets (it is now black & white), the wheel 40”, the table 7’ x 3.5’ with slots associated with each possible wager (see picture with tickets sticking up from table).  These are played on a nightly basis, primarily in bars in Minnesota. 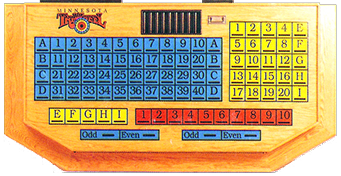 Functioning Minnesota Tri-Wheel® circa 1988 - Ramada Inn, Moohead, Minn.  These tables remain in use in 2015. 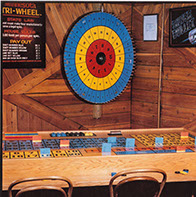 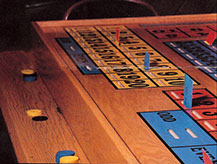 We produced four different versions of Tri-Wheel® tables: the original rectangular slotted 8’ x 4’ table (shown in "functioning" picture immediately above) and the smaller, 7’ x 3.5’ slotted table (shown left center above as "2nd generation").  For use in North Dakota felt/layout tables when the state abandoned use of the tickets (example below - left and center).  We also produced Casino Edition Tri-Wheel® with 14’ tables and custom colored wheels for tribal casinos (shown below on right). 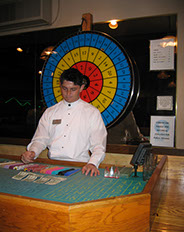 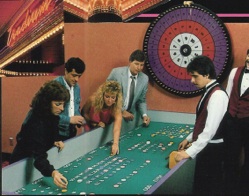 In 1993, we produced the Bass Tri-Wheel® that used twenty-four segments, twenty numbers and four bass, in the outer ring, twelve numbers in the middle ring and six numbers in the inner ring.  The game did not catch a large enough audience to sustain it.  Perhaps the smaller quantity of segments led to too small top-end payout.  Perhaps too, the loyalty for the original is simply too strong to break. 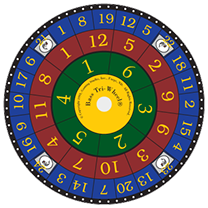 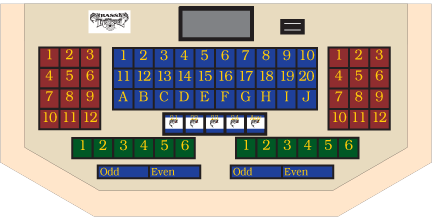 The Minnesota Tri-Wheels® entered North Dakota in 1991.  Within three years only a couple remained in operation.  In a mostly futile attempt to lower costs and save the game, the state allowed organizations to use chips without tickets.  This was not such a big change since organizations already had pit bosses, camera systems and internal control procedures for using chips on their “21” tables. It appeared that wheel games could not compete with the “21” tables that had been legal since the early 1980s.  In Minnesota, the Tri-Wheel is the only table game.  There is a slight learning curve to the game and players hesitate to ask how to play for fear of appearing naive to other players.  In North Dakota, with the table game “21” on site, the wheel game had less impact and players were too shy to ask.

In 1998 a couple of organizations asked Lien Games, a licensed distributor of equipment and supplies in North Dakota, about the possibility for a new wheel game.  Ken Lien, owner of Lien Games, called Joe Richardson, Gaming Studio and Tri-Wheel® designer.  Richardson was fond of the pig image that was designed by the late Norm Wilner of Universal Manufacturing.  Norm’s pig became one of the hottest pull-tab games in North Dakota.  Joe Wilner, Norm’s son, gave us permission to use the pig.  Working with Lien, we determined that a simple game with a single ring would probably appear less intimidating and the humor of the pigs would soften the fear of learning.

The Pig Wheel™ has forty-five segments, 1 - 40 plus five pigs.  Because this is played in North Dakota without tickets, there are a high quantity of wagers that can be made.  Not only those directly appearing, but you can bet corners and lines between the numbers.  The pigs are:  one white - Ken;  two blue - Bob and Joe; and, two pink - Roxy and, of course, Sue.  There is much fun as players yell for or against the pigs as the wheel rotations speed decreases and they rise in hope and fall in despair. The Pig wheel has been successful and the fleet of them continues to slowly grow. Go to www.pigwheel.com  or www.thepigwheel.blogspot.com for more information and to join the pig wheel community. 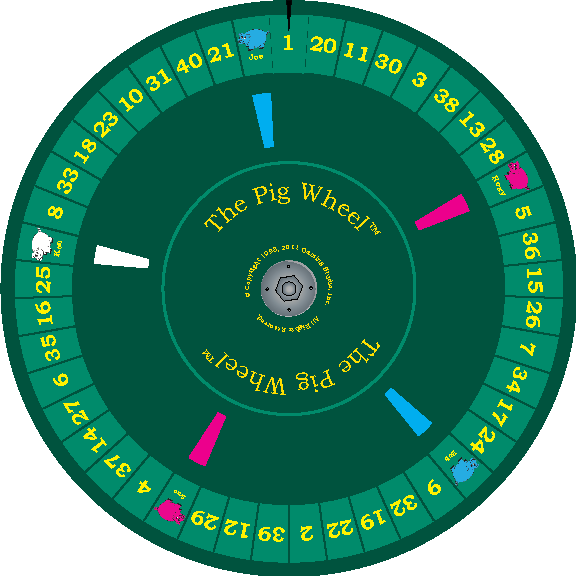 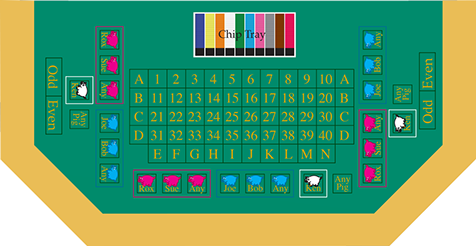 Other large wheels include “7 Wheel” and “Bell Wheel.”  They, like so many other designs, did not compete well against the Tri-Wheel®.  The wheel and table configurations are the same, one uses bells where the other uses 7s. 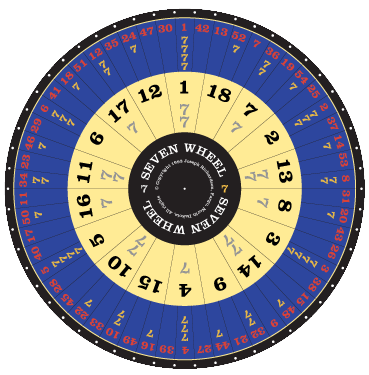 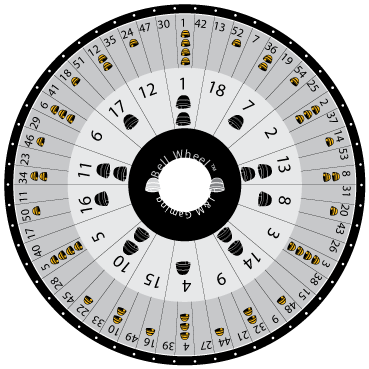 The Mini-30 wheel is an 18” thirty number wheel.  The organizations typically have a night each week using the wheel to effectively raffle off prizes, usually packs of meat.  They begin at happy hour and will go until around 7 pm.  They have to sell all thirty serial numbered tickets associate with the thirty numbers on the wheel in order to spin.  They are able to get a spin out every four or five minutes, sometimes faster.  They appear to get dozens of spins in for each week’s event and it does bring people into the pubs where the wheel is used.  Hundreds of Mini-30™ wheels are in play in Minnesota. 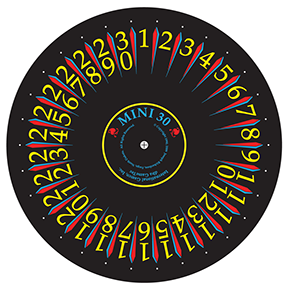