The Studio works entirely on games of chance for the regulated wagering industry. We call ourselves “Gaming” Studio, not “Gambling” Studio.   “Gamble for profit” and “game for fun.”  To engage in an activity whose outcome is indefinite primarily motivated by a desire for profit is, in our view, “gambling.” Using that definition, to “gamble” on games of chance is folly and could be a sign of mental problems.  Repeatedly surveys have shown that people play games of chance primarily for fun without the expectation of winning money. They play as entertainment. The more time in play for the money they are willing to lose, the greater the value.  Thus, we take our cue from the players themselves in saying that our business is all about gaming. The ultimate compliment a player can give a game designer, is “Ya, I lost a little money but I had a great time and I’ll be back.”  That compliment tells us that a player felt they received good value.  Providing entertainment value for a reasonable price is our ultimate aim.

Many people confuse mediums and games.  Paper games, some believe, are less onerous with regard for gambling abuse problems than electronic based games.  However, it is not the medium upon which a game is played so much as it is the specific features of the game design that make one game more problematic than another.  The fear that electronic-based games are more onerous than paper-based games with regard for problem gaming has actually helped prevent using electronic mediums to help reduce the problem.  With public sector gaming, state legislators often quite protectively define the games that may be authorized by the regulatory officials; however, the political process of deriving a definition hardly ever allows the time and depth of consideration that could overcome myths to arrive at greater gaming entertainment while reducing problems.  Thus, we muddle about with so called “slot machines” that are now so confusing that winning players are often unsure how much they won or the combination that they hit to win.  That’s entertainment?  More, a lack of competition among game design and manufacturing firms.

We seek to design electronic games with high entertainment value for the price charged to play.  We will not design electronic games aimed at deceiving players about their chances of winning; that show artificial near-misses to make players believe that they are “getting close;” and/or, that lure players into successive bets through interrelated qualification rounds for some illusive grand prize.  We aim to create games that are as transparent as they possibly can be so that players understand what they are getting into.

Public gaming (charitable and lottery) sectors raise money for popularly perceived public-value projects and organizations.  Public gaming is often conducted at neighborhood clubs, pubs and bars.  It is local and more accessible than distant destination casinos.  Hence, the players could be back quite often.  So, the challenge is to provide a good time at low-cost relative to the time-in-play while also meeting expenses and the intended fund-raising goals.  Designers, especially for this sector of the wagering business, need to attend to repeat players.  They will not come back if they lose too much.

Five questions for every game:  1) Is it fun; 2) is it secure and not exposed to cheating; 3) can the operators raise money through the conduct of the game;  4) do the internal control procedures allow for efficient regulation and timely auditing; and, 5) what is the impact on problem and pathological gamers.

Those ultimately responsible for charitable gaming activities, at least as they are conducted in North Dakota and Minnesota, are the sponsoring organization’s boards of directors.  The boards are often made up of civic-minded individuals who volunteer their time and associate their leadership reputations with the organization in order to further a public service mission.  Oddly, these organizations are often required by virtue of game enabling state statutes, to vend the highest-cost, least secure, most cumbersome to audit chances in the wagering world.

For a couple seconds of gaming pleasure, each of thousands (collectively composed of hundreds of millions chances in Minnesota) paper pull tab games are recorded at the manufacturing facility as shipped into state, recorded at the licensed distributor’s warehouse as received, recorded as going out from the distributor to the licensed organization’s storage facility, recorded as going from the organization’s storage to a licensed gaming site.  Then, the game (we hope with all of its chances/tickets) is placed in play and monitored until it is taken out of play.  The remaining chances unsold are counted, the total winning redeemed chances tallied, and the game is recorded out from the site back to the organization’s storage facility where it is kept for the requisite amount of time before being shredded and placed into a landfill (can’t be recycled because of plastic laminate or staples).  Think of reconciling the entire process and auditing such games....expensive?  How often are counterfeit winners cashed?  How often does the regulatory authority actually reconcile records of game movement through the entire process and audit individual games to match it to deposit records?

The high cost of each paper chance means that organizations forced into charging players more to play through lower payouts.  Lower payouts reduce the value of play and make charitable gaming less competitive than games in other venues.  Electronic chances do not have the cost of printing, shipping, counting of chances and reconciling value of winning chances to all chances sold.  Thus, electronic chances can provide higher payouts, less cost-to-player and better value.

Electronic games can be less expensive to vend; however, that depends on a functioning market vitality

Illustration of Value:  Cost for Time-in-Play.

It is a bit simplistic to only consider the cost of play per hour for various games; however, it is a starting point in evaluating various games.  Lotto games (not instant tickets) measure time in terms of days or hours between the purchase of a chance and the resolution of the random event that rewards a prize.  Lotto’s sell the story you tell when you speak with friends about what you would do if you won the very big prize.  Lotto is very different from on-site games that have bet resolutions measured in seconds or minutes of a player having chosen where to place a bet and for how much they wish to bet.  Slower on-site games like Gaming Studio paddle wheel designs take from 3.5 minutes to 5 minutes per bet resolution.  The wheel games have social, player interaction values that are higher than those with the much quicker pull tab that has a resolution time measuring in 4 - 8 seconds.  The wheel games, with a table used for registering where and how much a player is betting, allow players time to chat with each other and the wheel operator.  People you meet at the wheel table are often people you would not otherwise come to know.  Friendships can develop.  That higher level social interaction value is common to all table games and is very much part of the entertaining experience table games provide.  The value in pull tabs or typical slot machines is more an introverted one of escape with just you and that ticket or machine.  Pull tabs and, to a lesser degree slot machines, can be played with more than one person pooling money; however, the revelation of wins or losses tends to be one to one.

Here are samples of player costs per hour of play:

Note:  many players can open tabs in 4 - 6 seconds including time buying the tabs and redeeming the wins.  These are very expensive games. 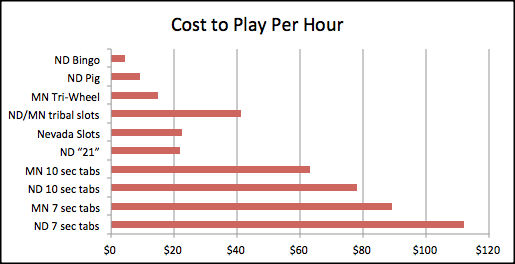 No Surprise:  Gaming, Like All Entertainment, Requires Product Refreshing

Changing games or upgrading to use more efficient and secure technology, is not “expansion of gaming.”  Allowing gaming to be conducted at premises or for age groups not not otherwise authorized, could be termed “expansion.”  Without regard for merit, both North Dakota and Minnesota expanded gaming by authorizing state lotteries after they had enacted charitable gaming.  The lottery constitutional amendments and enabling legislation are far broader in definition of games than with charitable gaming.  In North Dakota the lottery can run any multi-state online game and in Minnesota it is almost any game except:  1) lottery device operated by coin or currency which when operated determines the winner of a game and 2) pull  tabs as defined under the charitable gaming laws.  Both states added track betting and North Dakota added off-track betting parlors.  Expanded gaming while continuing to require that the only games charities can operate are those designed in the 40s and 50s (in the case of Minnesota’s allowance of electronic pull tabs, note they are required to be facsimiles of pull tabs) is certain to strangle this form of community fund-raising -- perhaps intentionally.

North Dakota has added several games to the original 1977 charitable gaming authorization; however, with the exception of “21,” they have been very minor games such as:  Calcuttas, punchboards and sportspools and a little less minor, our wheel/table games.  In Minnesota virtually no new games have been added since the original 1984 legislation until the 2012 session.  In both states forms of bingo using electronic devices have been either directly authorized or shoe-horned in on existing language.

The pull tab has run its course, especially given the advent of electronics which have been near ubiquitous for the last 30 years.